Don’t Have A VSEA Union Card?

Have You Been Threatened
At Work?

Learn about enrolling your business in the VSEA Advantage Discount Program here! 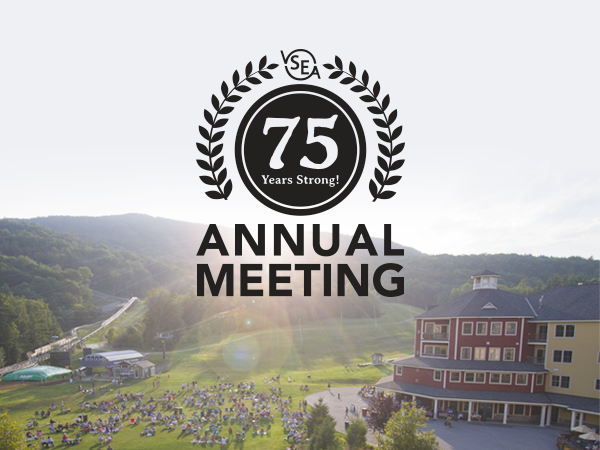 Each September, VSEA invites members to attend the union’s most important event of the year; its Annual Meeting. At the meeting, there is discussion about VSEA’s operating budget, legislative priorities and many of the other issues impacting VSEA members and your services. Often, these discussions and debates are followed by a vote by the full body, and every active VSEA member in attendance gets a vote.

VSEA members met today in Ludlow for the union’s 75th Annual Meeting, and for members and retirees who could not attend, here’s a quick recap of what took place:

2) Members approved an operating budget and approved raising member dues .25 cents per pay period. Formation of a dues-study committee was also discussed and approved, and it will be chaired by VSEA 2nd VP Leslie Matthews.

3) Members approved a change to a bylaw governing Board attendance.

4) Members adopted a "Climate Change Crisis" resolution, which was drafted by members and adopted recently by the Central Vermont Chapter. One of the resolution’s drafters, Bob Atchinson, introduced the resolution, which he said will provide members and retirees with "ways to respond" to the serious issue of climate change. He also stressed the importance of labor helping to champion this cause.

5) Members approved a resolution (unanimously) to name the large Board room at VSEA headquarters after longtime VSEA activist and leader (and baker!) Ruth Leithead, who is right now battling a very serious illness, which kept her from attending this year’s Annual Meeting for the first time in decades. NMU Chair Bob Stone introduced the resolution and shared a powerful passage about VSEA and union power from a piece Ruth had drafted in 2007. Our thoughts and prayers are with you Ruthie!!

6) Members elected Eric Davis and John Federico to the Statewide Retirement Board, as VSEA representatives.

Members and retirees in attendance were also treated to a rousing keynote address from UFCW Local 1445 President Jeff Bollen; one of the leaders of Stop & Shop workers successful strike against their employer. Watch a video of Mr. Bollen’s remarks here.

Thanks to everyone who took time out of their lives to attend this special anniversary Annual Meeting.