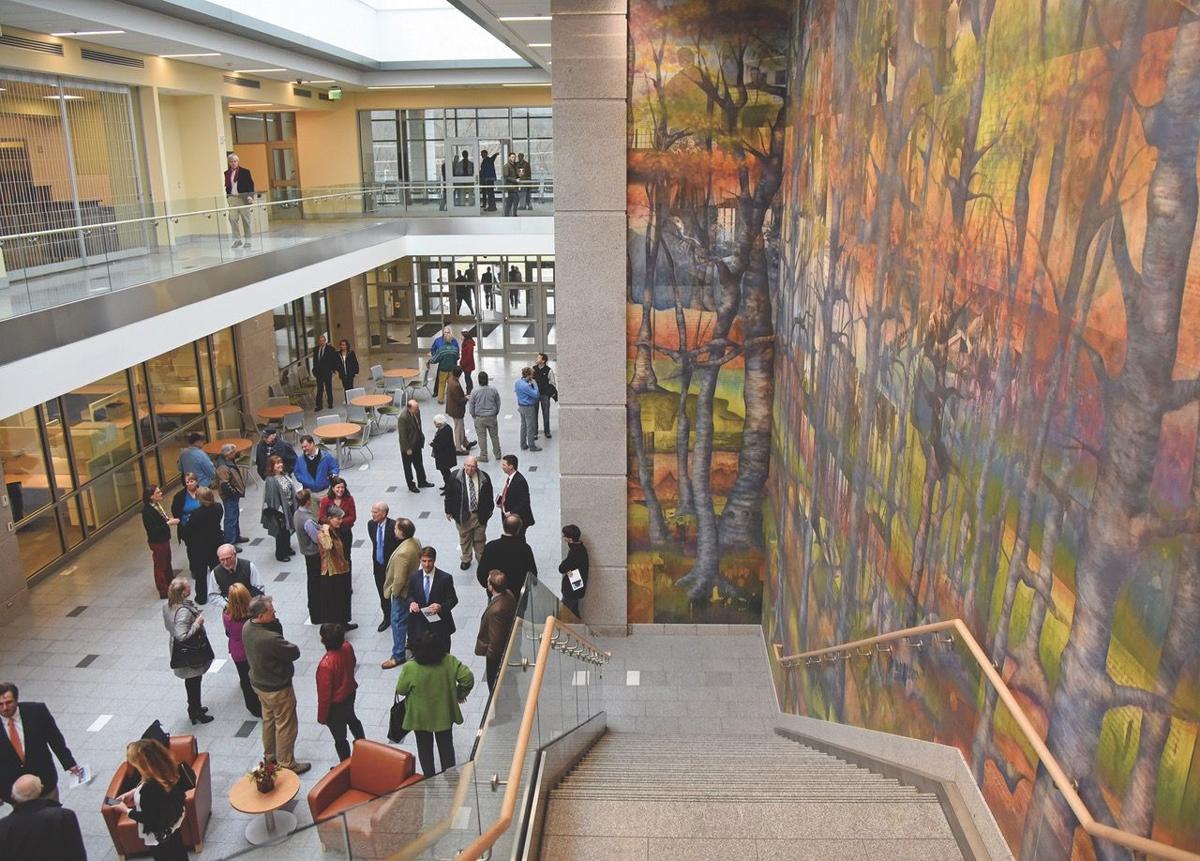 The interior of a new 86,000-square-foot office building, with artist Sarah-Lee Terrat’s mural at right. 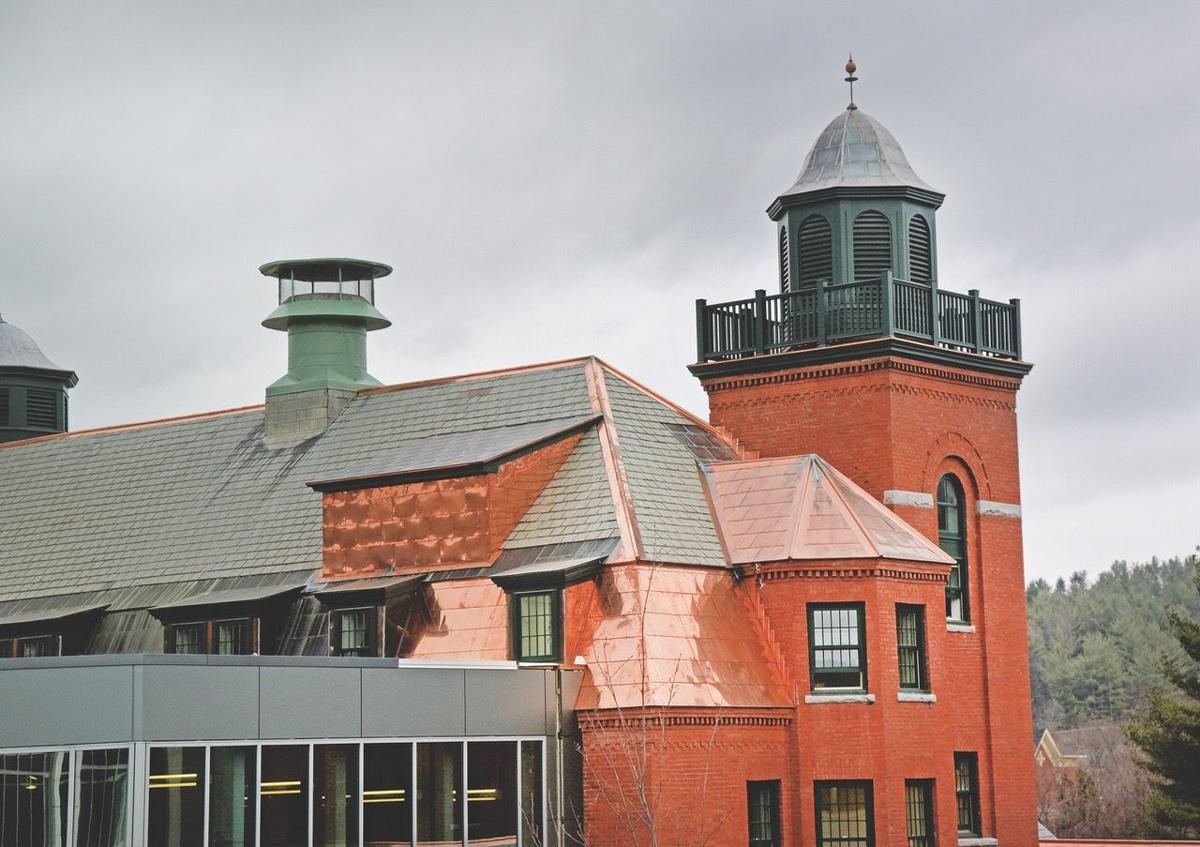 The interior of a new 86,000-square-foot office building, with artist Sarah-Lee Terrat’s mural at right.

About five months after the first wave of state workers started moving into the new building at the State Office Complex, it’s almost as if they’d been there all along.

At least, that was the case for Laurie Hurlburt of North Fayston.

Hurlburt said the transition from state offices at GlobalFoundries in Williston to Waterbury was practically seamless for her.

“Our last day in Williston was a Friday, and we were back to work on Monday in Waterbury,” she said.

More than four years ago, Hurlburt and many of her colleagues lost their workplace when floodwaters from Tropical Storm Irene ripped through downtown Waterbury.

Much of the complex was badly damaged, and employees of the Vermont Agency of Human Resources had to scatter to offices all over the state, unsure whether they would make it back to Waterbury.

Today, the complex grounds hardly resemble what was there before, said Monica Light of Barre, who works in the Department of Disabilities, Aging and Independent Living.

The office complex had been converted from the former state mental hospital, but the new complex is designed and built for offices, with an open concept that makes communication easier among colleagues.

“There’s more of a purpose for its design,” Light said. “In its previous iteration, it was more haphazard. People were just put here and there.”

“It’s great to see old friends again,” said Diane Chapin of Middlesex, who works in the family services division in the Department for Children and Families.

At a ribbon-cutting ceremony in December, Gov. Peter Shumlin spoke about the energy efficiency of the new complex. Technology enabled the state to build a flood-safe, efficient complex equipped for the cold winters and hot summers of Vermont, the governor said. The old buildings were drafty in the winter and sweltering in the summer.

The new office building at the complex has a lot of natural light, large windows and a first-rate heating and cooling system. But it retains Vermont charm, with dark-stained wood and rustic memorabilia.

That’s one of the best parts of the new building, Chapin said.

“I love the way that they incorporated historic Vermont products,” such as an old sewing machine right at the base of the stairs in the historic section of the building, Chapin said.

For Dawn O’Toole of Waterbury, chief operating officer for the Department of Human Resources, the move back to the Waterbury complex made her commute a lot shorter.

“It’s heaven” not having to drive to Williston every day, she said.

But that’s not the case for many people who started working for the state when the offices were elsewhere, and now must drive to Waterbury.

“The table’s been kind of turned on them,” she said.

Local businesses are happy to have the offices back in town, and Revitalizing Waterbury hosted a “Welcome to the Neighborhood” party and business fair last week at St. Leo’s Hall.

“We quickly realized that the local businesses were having difficulty meeting the employees directly,” said Karen Nevin, executive director of Revitalizing Waterbury. “With the Waterbury State Office Complex restricted, we decided to create an event to bring the employees and businesses together.”

Welcome to the neighborhood

We invest in the community. Invest in us.

Show us you enjoyed this content by becoming a newspaper subscriber.

We use a Facebook Comments Plugin for commenting. No personal harassment, abuse or hate speech is permitted. Comments should be 1000 characters or fewer. We moderate every comment. Please go to our Terms of Use/Privacy Policy "Posting Rules and Interactivity" for more information.

Rusty DeWees appears in “Made in Vermont”

Rusty DeWees is one of the characters in the independent comedy film “Made in Vermont,” being shown at the Grange Hall Cultural Center in Waterbury Center for two showings on Saturday, Jan. 25, at 4:30 and 7 p.m.

Waterbury Winterfest is a celebration of winter

There’s no better way to beat the winter blues than at the popular Waterbury Winterfest, where community members and visitors come together to play, laugh, sing and dance.

Art on ice: Cold-weather carvers talk about their art ahead of Stowe’s 20th annual ice-carving competition

Mark Crouthamel brought a 22-ton block party to Stowe this week, in the form of 180 oversized ice cubes that were dropped off at businesses around town and form the canvas for a group of super chill artists participating in the 20th iteration of the annual Stowe Winter Carnival Ice Carving Competition.