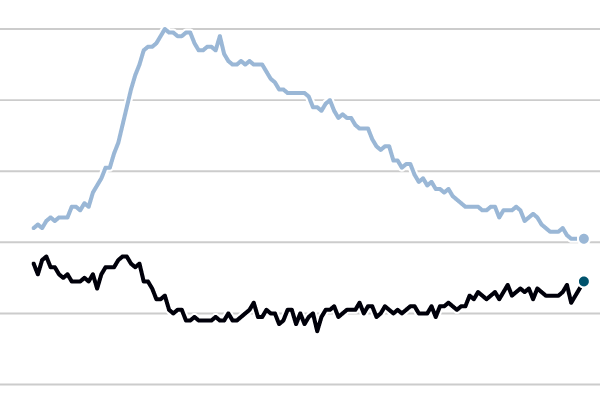 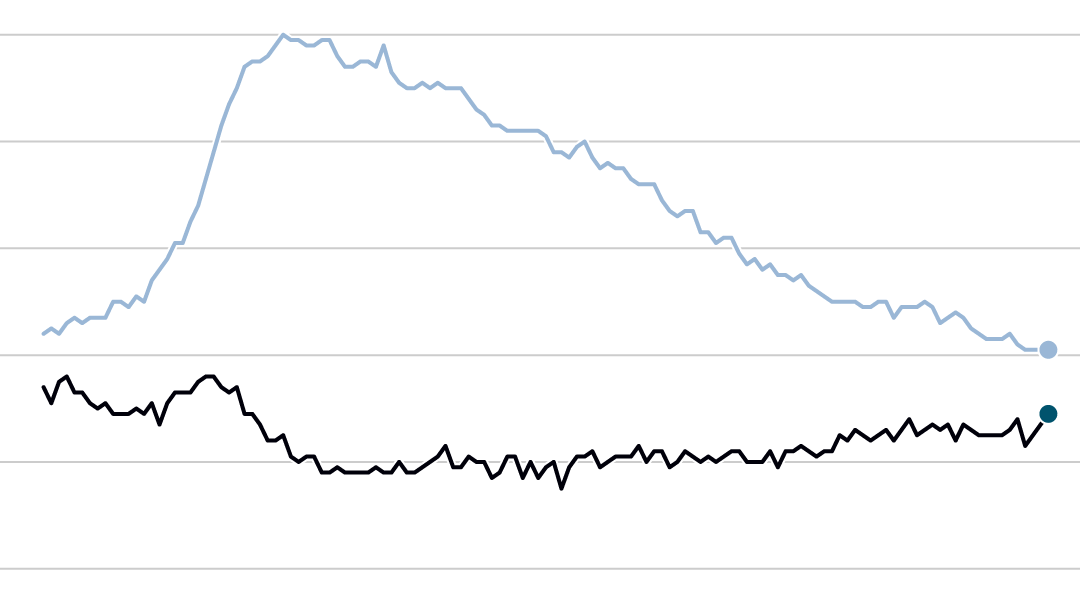 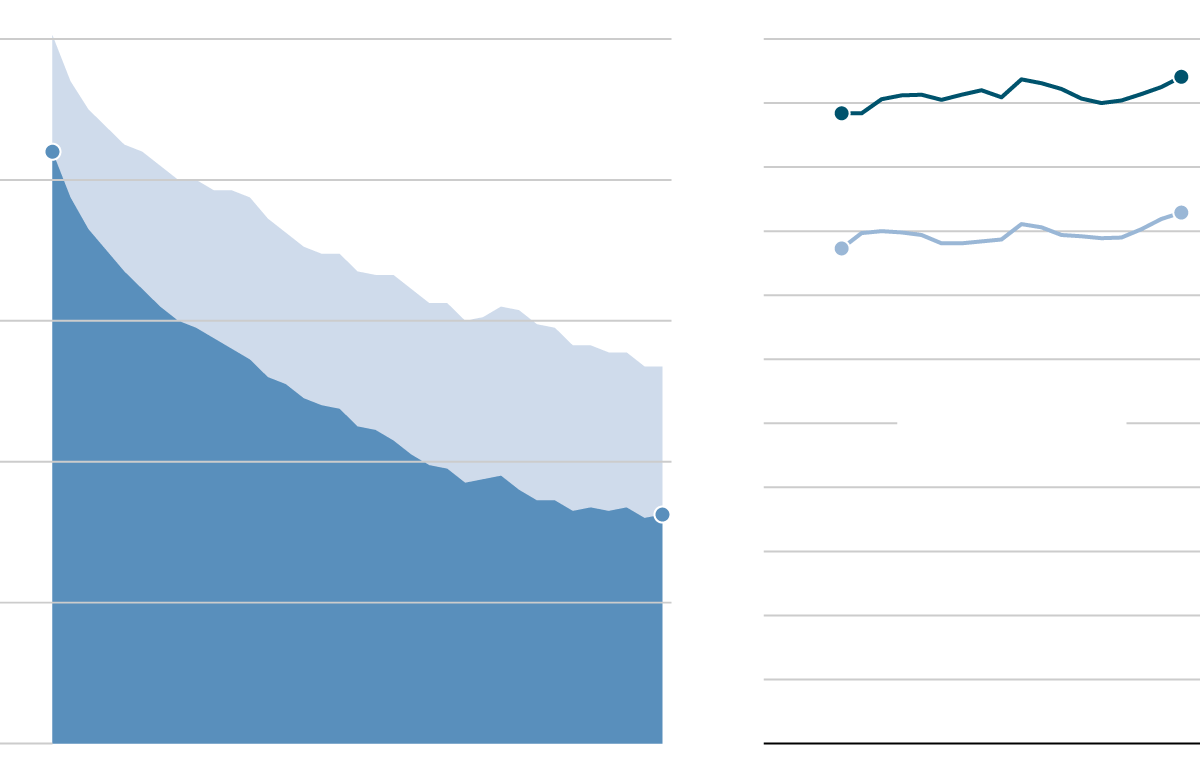 A collapse in the rate of union membership for private-sector employees — to 6.5 percent last year from the upper teens in the early 1980s — appears to have played a key role in holding down wages. This is partly because unions benefit workers directly: Average pay for workers represented by unions tends to be higher than for those who aren’t, even after controlling for education and other characteristics. But unions also benefit workers indirectly. In industries and regions where unions have a larger presence, pay tends to be higher for all low- and medium-wage workers, not just those represented by unions.

“If you work for a nonunion firm and your employer is worried about the possibility of a unionization drive, one way to dampen down that possibility is to pay workers at the union rate,” said Jake Rosenfeld, a sociologist at Washington University in St. Louis.

The effects are especially pronounced for men. A recent study by Mr. Rosenfeld and two colleagues estimated that wages for men employed in the private sector who are not union members would have been 5 percent higher on average — about $2,700 per year — by 2013 if unions had the same reach as in the late 1970s. (The figure excludes senior managers.) For men with only a high school diploma or less, that figure rose to nearly $3,200. NOAM SCHEIBER

Contract restrictions, such as noncompete clauses and no-poaching agreements, that prevent workers from quitting their jobs for better ones have grown across the work force. Once reserved for highly paid, highly skilled employees like doctors and engineers, these contracts have filtered down the ladder to nurses, laborers and even retail clerks.

Virtually every study on the subject shows that these agreements reduce wages in an area, since many people get their largest raises when they leave their company or threaten to. Noncompete clauses also tend to prevent growing businesses from hiring as fast as they would like, and that can harm the overall economy by keeping talented employees from joining the higher-productivity companies that move business forward.

In many fields, a similar effect has been produced simply by the consolidation of local businesses, particularly outside major cities — areas where President Trump’s campaign tapped into economic frustrations. A recent study found that wages fell when fewer employers in a geographic area listed most of the open jobs in an occupation. CONOR DOUGHERTY 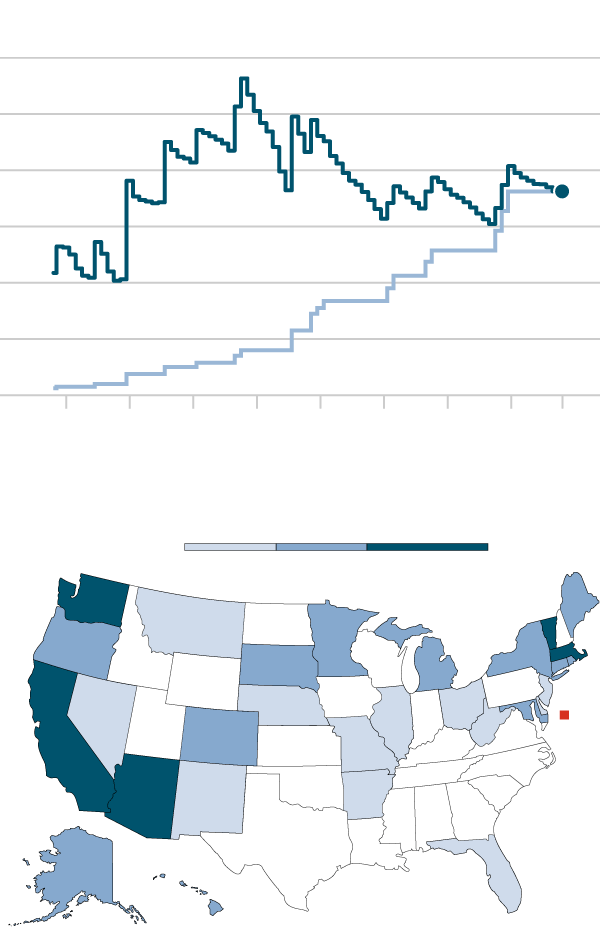 The federal minimum wage, currently $7.25 an hour, has not increased since 2009, and its purchasing power has never returned on a sustained basis to what it delivered in the 1960s and ’70s.

In response, some state and local governments have passed laws raising minimum wages to as high as $15 an hour, arguing it is the best way to ensure that low-wage workers who otherwise have little leverage are able to earn a living wage and share in the country’s economic growth. That movement has produced a backlash in Republican-controlled statehouses, where lawmakers have tried to pre-empt localities from enacting their own minimum wages.

Opponents maintain that raising the wage floor is a job killer and reduces the number of hours worked. Most of the recent research, however, shows that a moderate increase in the minimum wage has little or no effect on overall employment. Whatever negative effects there might be, some economists say, are offset by workers’ greater purchasing power and revved-up economic activity. PATRICIA COHEN

Technology and globalization have both made it easier for businesses to find cheaper alternatives to paying their workers more money. American manufacturing jobs, once a mainstay of well-paying blue-collar work, started rapidly declining after 2000, as China rose as an exporting power.

At the Rexnord Corporation’s steel bearings plant in Indiana, for example, American employees used to earn an average of $25 an hour plus benefits. Last year, the company moved the entire factory and its operations to Monterrey, Mexico, where the pay would average less than $6 an hour. Rexnord said the move would save the company $30 million and enable its products to compete better with cheaper imported bearings. The savings and increased profits would benefit stockholders. The losers were Rexnord employees.

The same dynamic occurs when businesses see they can save money by replacing workers with technology that reduces costs in the long run. Manufacturers that kept operations in the United States or built new ones have increasingly relied more on automation and advanced technology than on people. Thus, domestic output has expanded significantly even as payrolls have fallen. PATRICIA COHEN 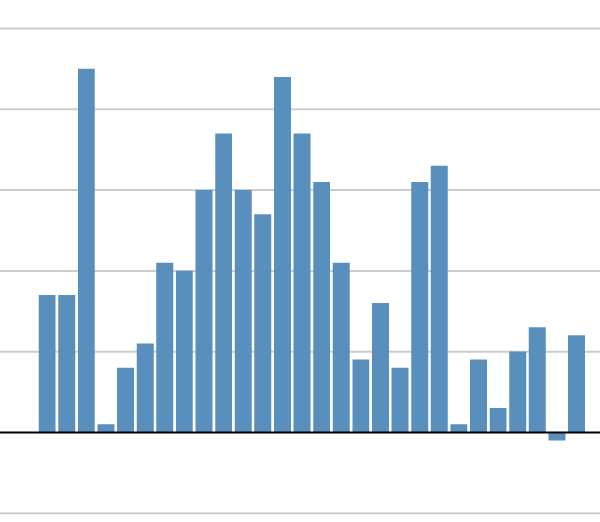 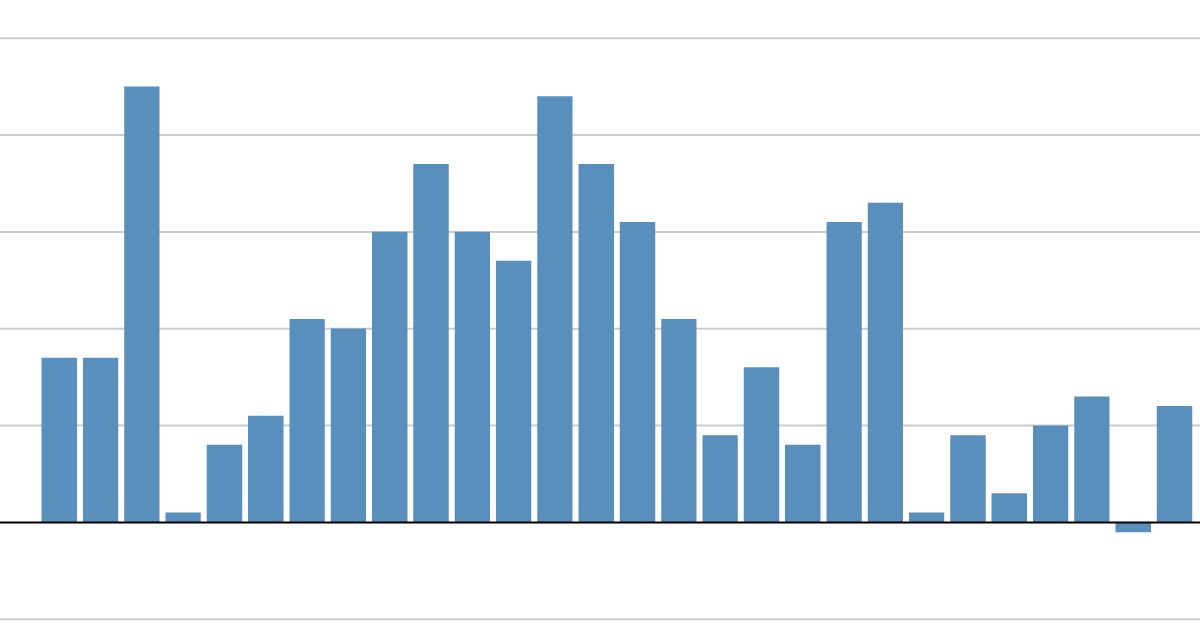 One possible explanation for slow wage growth: Productivity growth has been just as anemic. Productivity — in its simplest form, how much value the average employee creates in an hour of work — rose about 2 percent per year from the 1970s through the first decade of this century. It has risen less than 1 percent per year since then.

Standard economic theory holds that over the long run, pay and productivity ought to rise together: As workers produce more per hour, companies can afford to pay them more. That doesn’t always happen in practice — pay has lagged behind productivity, at least by some measures, since the 1970s. Still, if productivity picks up, wages are likely to follow suit.

The trouble is, weak productivity growth is just as much of a mystery as weak wage growth. There are pessimistic explanations (recent technological advances are less economically significant than those of earlier eras) and optimistic ones (recent advances are significant, but we haven’t felt their full effects yet). But no one is really sure. BEN CASSELMAN

Companies have increasingly outsourced work once handled by their employees. And wages for work performed by contractors tend to be lower, because they don’t benefit as much from companies’ internal pay scales and their norms relating to fairness.

Profitable businesses with generous pay scales tend to give low-skilled employees above-market wages. They appear to worry about the blow to morale and cohesion if they squeeze those workers while others share in the company’s prosperity. But once those jobs are pushed out of the company, wages fall to the market rate.

A 2010 study by the economists Arindrajit Dube and Ethan Kaplan found that janitors made 4 to 7 percent less, and security guards 8 to 24 percent less, when they were employed by a contractor rather than the company whose facilities they cleaned or protected.

While there are no precise estimates of the impact of this trend, evidence suggests that the effect is increasing. One estimate found that the portion of workers in so-called alternative arrangements, like working for a contractor, rose to nearly 16 percent in 2015 from about 10 percent in 2005. NOAM SCHEIBER

… but not based on 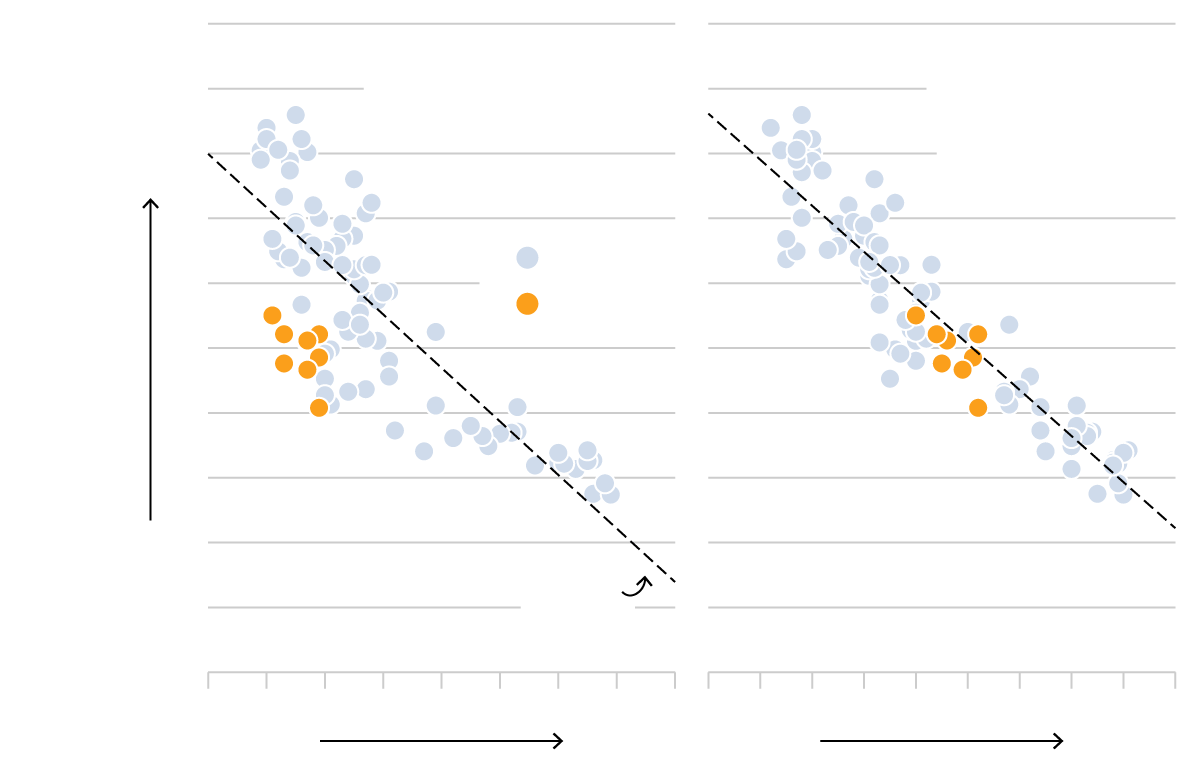 … but not based on

… but not based on a broader

With the nationwide unemployment rate at 4.1 percent, the lowest since 2000, economists have been surprised by the slow growth in workers’ paychecks. Historically, when that few people are unemployed, companies have had to pay more to attract workers — simple supply and demand.

If Mr. Ozimek’s analysis is right, it suggests there is a sizable pool of people who aren’t officially counted as unemployed but who might be willing and able to work under the right circumstances. Some may be struggling with addiction or other illnesses, or may have been out of work so long that they’ve given up looking. Others may just not be willing to work for the wages offered.

As the economy improves, more may come off the sidelines. But as economists at the Federal Reserve Bank of San Francisco recently argued, that could make overall wage growth look worse, because people entering the labor force usually earn relatively low salaries. The country’s aging population could also be a factor, because retiring baby boomers (who, on average, earn relatively high wages) are gradually being replaced by millennials (who generally earn less). BEN CASSELMAN